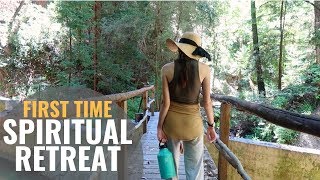 Come along as I go on a spiritual retreat with my daughter for the very first time. We check into the sleeping pods at 1440 Multiversity, a beautiful retreat facility in the Santa Cruz Mountains near Scotts Valley, CA, then hike around the property, exploring its many trails and extensive kitchen garden, identifying many plants along the way. After an amazing dinner of locally-sourced foods, our 4-day program begins with Dr. Jayanath Abeywickrama, or Dr. Abey for short.

Dr. Abey is an Ayurvedic doctor from Sri Lanka. He comes from a lineage of 31 generations of unbroken traditional Ayurveda practice, which is one of the world’s oldest, holistic, whole-body, healing systems. Developed more than 3,000 years ago in India, it’s based on the belief that health and wellness depend on a delicate balance between the mind, body and spirit. Dr. Abey is an influential medical doctor and has worked with the Health Minister of his country and a former Prime Minister of India. He teaches his methods to Western-trained doctors in Germany, the United States and other countries.

Rankema means full body and mindwork, which is exactly what we got on this retreat. Over a long weekend, we expanded our consciousness around mind, body and spirit. We found clarity on what we really want in life, and we learned to rearrange the energies all around us and within us, pointing them in that one direction that matters most for achieving our goals.

This is something we’ll need to continue practicing as we work toward our goals, and yes, we must work to achieve what we want. This isn’t about wishful thinking. But having your energies 100% aligned with your goals is a powerful force for getting you wherever you want to be, and from this retreat, I have better, deeper tools for staying focused.

Shari Chase met Dr. Abey by chance while touring the pyramids of Egypt. They got into a conversation about sustainable living, and Dr. Abey shared the story of his village. 10 years ago, people in his village were getting sick and dying of pesticide poisoning. Factory farming had taken over Sri Lanka, and this was the unintended result. Dr. Abey knew that rice could be grown naturally, according to the ancient ways, and he knew of 246 ancient rice varieties that had been saved that could be used as seed crop. He evangelized this idea, speaking and writing all over the country, but people were afraid it would fail and that they would starve. However, he convinced his village to try it, and it worked.

After hearing Dr. Abey’s story, Shari went to visit him in Sri Lanka to see for herself. In a world of GMO food—with gastrointestinal issues increasing everywhere, a dangerous reliance on increasingly homogeneous, hybrid seeds, and unsustainable farming models requiring constant chemical input—Shari saw the enormous value of his work and decided to support his efforts.

Together they formed a foundation to help the farmers replicate their success throughout Sri Lanka and beyond. These pure rice strains that the Sri Lankan farmers produce, grown sustainably and blessed and energized by those who harvest it, contain more nutrition and medicinal value than rice commonly available in the west. But this rice also represents something else—the very best of humanity, people working together, in harmony with the environment, toward a solid, sustainable, energized future with heart-driven resilience.

Latest from the Blog

What Our Readers Are Saying

We use cookies on our website to give you the most relevant experience by remembering your preferences and repeat visits. By clicking “Accept All”, you consent to the use of ALL the cookies. However, you may visit "Cookie Settings" to provide a controlled consent.
Cookie SettingsAccept All
Manage consent

This website uses cookies to improve your experience while you navigate through the website. Out of these, the cookies that are categorized as necessary are stored on your browser as they are essential for the working of basic functionalities of the website. We also use third-party cookies that help us analyze and understand how you use this website. These cookies will be stored in your browser only with your consent. You also have the option to opt-out of these cookies. But opting out of some of these cookies may affect your browsing experience.
Necessary Always Enabled
Necessary cookies are absolutely essential for the website to function properly. These cookies ensure basic functionalities and security features of the website, anonymously.
Functional
Functional cookies help to perform certain functionalities like sharing the content of the website on social media platforms, collect feedbacks, and other third-party features.
Performance
Performance cookies are used to understand and analyze the key performance indexes of the website which helps in delivering a better user experience for the visitors.
Analytics
Analytical cookies are used to understand how visitors interact with the website. These cookies help provide information on metrics the number of visitors, bounce rate, traffic source, etc.
Advertisement
Advertisement cookies are used to provide visitors with relevant ads and marketing campaigns. These cookies track visitors across websites and collect information to provide customized ads.
Others
Other uncategorized cookies are those that are being analyzed and have not been classified into a category as yet.
SAVE & ACCEPT
Scroll To Top